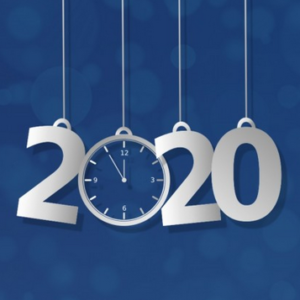 Perhaps the most overused bad joke in school is when students or even Heads of School say, “see you next year” before winter break.  Somehow we have become enthralled by the changing of the calendar year and we stay up until midnight watching various items drop out of the sky while counting backward from 10 to 1 to herald in the new year ahead.

It is also customary to make new year’s resolutions.  In Judaism, the concept of a new year is not as much a celebration with fireworks and music as much as it is a time for reflection and taking stock of one’s past and future.  When we look back over the past year, it is through hindsight that we can start to have a vision of what 2020 should hopefully look like.  Thankfully, there have been many successes over the past year we can hopefully continue to build on in the coming year ahead.

One noteworthy local achievement this past year was Mr. Yoni Alon completing the Talmud for the third time.  Over winter break the worldwide 7-year cycle of studying the “Daf Yomi – one page a day” of Talmud will conclude with hundreds of thousands of people celebrating in a Talmud-style New Year’s celebration as over one hundred thousand people will gather at the Meadowlands in New Jersey January 1st.  The new cycle of Talmud study begins with the book of Brachot on Sunday, January 5th.  There will be a local “Daf Yomi” Talmud study group beginning that night, led by Mr. Yoni Alon, open to the community nightly at 8:00 pm at 1805 Sandcroft Drive, 29407.

I was challenged when one of our AHA teachers told me their resolution was to start the Daf Yomi study of Talmud.  Frankly, I felt a little “Talmud shamed” so my resolution is to try and join this illustrious course of study.  Feel free to join in this resolution as well.  It is worthwhile to create a 2020 vision of a year filled with daily Jewish intellectual pursuits that edify one’s character and sharpen one’s mind.  For those who would like to receive a daily dose of Jewish wisdom each evening over Chanukah, there is a 5 minute, animated Jewish story related to Chanukah available each night of the holiday.  Click here to access the videos.

There have also been some very sad things that occurred in 2019.  Our world has faced a dizzying number of acts of senseless violence.  It is difficult to drown out the painful feelings that are very real in the aftermath of violence perpetrated upon innocent victims.  Whether in the Jewish community or the general community at large, it is never easy to ignore the trauma induced by hate-filled actions.

These types of actions fly in the face of the most fundamental principle of Judaism which is to preserve and protect life.  In the months ahead, I am proud to say Addlestone Hebrew Academy will be at the forefront of convening communal gatherings to help us cope with and respond to violence and hatred in the Jewish and general community.  Although at times there is not much we can do to combat violence other than to be vigilant, it is important to respond to hurtful actions with helpful actions.  I was so proud to read that the Jewish community in the Rockland County area raised over $50,000 from a Go Fund Me effort in one day to present to the widow and family of the police officer killed in the Jersey City shootings last week.  As the Hassidic masters teach about Chanukah, “a little light pushes away much darkness.”

In the aftermath of the shooting in Jersey City, I was struck by a comment on the internet that mentioned there were Conservative Jews targeted in Pittsburgh, Secular Jews targeted in Halle, Germany, Chabad Jews targeted in San Diego, and Satmar Hassidic Jews targeted in Jersey City.  The anonymous posting observed that it didn’t seem like enemies of Jewish people differentiated between types of Jews and perhaps that is a lesson we should take to heart and accept all members of our community without worrying about labels.

I remember the story of how the great Lithuanian sage, Rabbi Joseph Soloveicik, OB”M, visited the birthday celebration of the Hassidic Rabbi of Lubavitch, Rabbi Menachem Mendel Schneerson OB”M.  These two Rabbis were descendants of historically bitter opponents for centuries in Europe.  When the Lithuanian Rabbi was asked why, unlike his ancestors, he saw it fit to visit the court of a Hassidic Rabbi who, in the past would have been viewed as a foe, he simply responded with, “In Auschwitz, the Nazis didn’t differentiate between Lithuanian and Hassidic Jews.  Therefore it seemed like it was time to end that dispute.”

Have a De-light-full Chanukah,
Rabbi Elisha Paul
Head of School

P.S. – Make sure you check out Addlestone in the news!  We were featured in the Post and Courier on Sunday, December 15th!  Click here to read the article.