The Impact of Our Actions 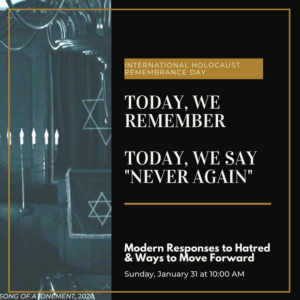 As a student of history in general and the Holocaust in particular, I have often been struck by how seemingly small actions can make a gigantic impact.  Heroes such as Raoul Wallenberg or Ambassador Sugihara saved hundreds and even thousands of lives by courageously providing legal documents for Jewish people trying to escape the Holocaust.

As some of you know, last year our school received funding from the Saul Alexander Foundation to help respond to the increasingly violent, hate-fueled actions of a few misguided individuals.  Whether it was the Mother Emmanuel shooting in Charleston or the Tree of Life shooting in Pittsburgh, the list goes on and on of innocent victims of these types of heinous acts.  As part of this initiative, Addlestone helped produce a short documentary about the Yom Kippur shooting in Halle, Germany.

Although regretfully, due to COVID, we weren’t able to have a public showing of this film last year on the 5th anniversary of the Mother Emmanuel shooting as originally planned, I am happy to report, that in conjunction with International Holocaust Memorial Day, marking the liberation of Auschwitz, this week, we will be partnering with the College of Charleston’s Jewish Studies Department and the JCC to present our award-winning short documentary, “Song of Atonement”, accompanied by some world-renowned speakers from the government of Germany and Israel.

While researching the background of this film, we discovered something truly astounding.  One of the reasons the shooter did not succeed in killing anyone in the shul on that Yom Kippur was because he was not able to shoot through a reinforced security door that was installed in the Halle Jewish communal center and synagogue a few years prior to the shooting.  This door was purchased by contributions made by Jewish communities around the world, including Charleston, to a Jewish Federation campaign in conjunction with the Jewish Agency to raise money to reinforce the entrances to synagogues all over Europe.  Amazingly, it turns out that it may have been your contribution that helped save the lives of many people that fateful Yom Kippur day.

Please consider this my personal invitation to join the over 115 individuals registered thus far for this free communal event.  To register, please click here.